The Insane Lives of George Whitefield and John and Charles Wesley

October 16, 2020
If you aren't aware (and you should be😊), I host a podcast called Do Theology with Jeremy Howard, in which we seek to keep doctrine in its place. Subscribe wherever you get your podcasts, rate, review, share, and all that jazz.
Anyways, we recently had Joel and Troy from Revived Thoughts on our podcast. Revived Thoughts is a great podcast that brings some of the greatest sermons of church history to life while providing biographical information about the original preachers. We had them on to talk about doing theology in church history when there are many different theological positions represented. In particular, we talked about the lives of Geroge Whitfield and John and Charles Wesley and how they managed to maintain their relationships despite significant theological differences. Revived Thoughts also released an episode of a sermon read by Jeremy that was originally preached by John Wesley at the funeral of Geroge Whitfield. If you haven't listened to these two podcasts, I encourage you to do so now here:
Do Theology with Revived Thoughts
Revived Thoughts: John Wesley Sermon

In anticipation of those recordings, I did some reading on the lives of John, Charles, and George, and I learned of some incredible things that blew my mind.

For those not familiar with the history of these individuals, God used these men in astounding ways in the 1700s. John and Charles Wesley were the creators and leaders of the Holy Club. The Holy Club started as simply a discipleship group where John and Charles organized converts to Christianity, taught them spiritual disciplines, and helped them grow in their faith. Over time these groups grew and the Wesleys had to train and dispatch more men to lead groups all over England. Their rigid structure for their gatherings and spiritual formation eventually earned them the nickname "Methodists", and their movement eventually came to be known as the Methodist Church (though, sadly, the majority of modern-day methodists have abandoned the Wesleyan heritage/tradition).

One of the men who came to be part of the Holy Club was none other than George Whitfield. Whitefield was a gifted speaker and evangelist, and quickly rose in responsibility, leadership, fame, and popularity in England, and eventually the Americas. The Wesleys and Whitfield became close friends, and Whitfield absolutely revered John and considered Charles a close brother.

In the midst of this friendship, there are some bizarre and fascinating details from the lives of these men that I'd like to share with you, and then some lessons we can learn from that at the end.

First, though these men were the best of friends, differing theological convictions tested their friendship nearly to the breaking point. John and Charles's theological tradition is committedly Arminian. They rejected the concepts of predestination and election and viewed Calvinistic theology as misrepresenting the character of God. Whitfield, on the other hand, was always more in the Calvinistic tradition, though his convictions in that were not as strong until he spent time ministering in the Americas where he was influenced by Jonathan Edwards. As his convictions grew, so did the tension between the Wesleys and Whitfield. Upon leaving for America, he left the (Calvinistic) church that he started in the care of John Wesley. Wesley took the opportunity to preach a sermon promoting Arminian Theology and then subsequently published that sermon as a pamphlet, and then sent the pamphlet over to the Americas for circulation. Whitfield was devastated by this and viewed it as a stab in the back from a close friend. He desperately wanted to avoid the conflict, but John's pamphlet was causing a stir. He wrote in a letter to John,


How would the cause of our common Master suffer by our raising disputes about particular points of doctrines! . . . For Christ’s sake, let us not be divided amongst ourselves . . . Avoid all disputation. Do not oblige me to preach against you; I had rather die . . .

It is clear that Goerge desperately wanted to protect their relationship. The Wesleys, however, did not relent, and Whitfield did not help matters when he returned the favor. Whitfield eventually came back to England and upon being invited to speak at Charles' church, Whitfield preached a pro-Calvinism sermon that left Charles fuming. How the turn tables...

What followed were hours of tense, impassioned dialogue where the three sought to be reconciled. They valued their relationship but seemed to be at an impasse, a real Barnabas/Paul moment. Whitfield wrote in his diary,


It would have melted any heart to have heard Mr. Charles Wesley and me weeping, after prayer, that if possible the breach might be prevented.

Second, though their tense relationship is stunning in many ways, what is even more incredible is that they managed to learn how to set aside some of those differences and preserve their relationships with one another.  They came to a place where they concluded it was best to agree to disagree because they valued their friendship more than the secondary doctrine over which they disagreed. They both affirmed the Gospel--and affirmed each other's affirmation of the Gospel--and that was enough. Their relationships were as fully restored as you could ever hope them to be. Wesley and Whitfield were once again invited to speak at each other's events. Whitfield refused to build Calvinistic churches where the Wesleys had an existing presence, and the Wesleys agreed to do the same. John and Charles at times had issues with each other, and they brought in Whitfield to help mediate those differences. When George died, Charles wrote a eulogy, and John preached the funeral sermon, in which both men honored the life and ministry of Whitfield. 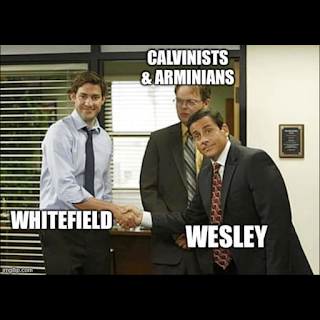 The third bizarre detail that I found in the midst of my study was that the Wesleys drew lots for major decisions in their lives. I understand that this is a practice in some circles, but it still strikes me as strange. When Whitfield was first leaving for America, John drew lots and determined that Whitfield should stay in London. Whitfield was flabbergasted, but strongly believed he ought to fulfill his obligations and stayed his course, and God used him mightily in America. John concluded that God allowed the lot to be "wrong" in order to test Whitfield's motives and resolve. Whitfield found the whole thing as strange as I do. Before preaching Arminian theology at Whitfield's church, John again drew lots to determine if he should do so. Though the Scriptures are clear that the result of every lot cast is from the Lord, I believe that the Lord would direct us to make decisions in keeping with sound, biblical wisdom, rather than relying upon the drawing or casting of lots.

Fourth, the love life of John Wesley is insane. First, his pursuit of Grace Murray is awkward and clumsy, especially because she was already betrothed to another man! When Charles learned of John's intent to ask her to marry him, he acted as quickly as he could to marry Grace to her betrothed. When John was informed of this, he was understandably upset. John and Charles' relationship was strained at this point and they asked George to come in and help mediate their disagreement.

A few years later, John set his eyes on another woman, Molly Vazeille, and this time foolishly left Charles out of the loop until he was married. Had he consulted with Charles, he would have learned of the low opinion he (and the entire church, for that matter) had of her, and perhaps could have prevented years of hardship. While she did not treat John well, John certainly did not treat her well either. He was frequently gone for weeks on end and did little to show her the attention she rightly desired. At the same time, she failed to communicate and understand her husband, and allowed herself to get carried away with false perceptions of what John was doing. Stuck at home, she would often read his "fan mail" (with his permission), coming from individuals seeking advice. There were several times when Molly thought the ladies asking John for advice were a little too affectionate, and she became so jealous and suspicious of her husband that she started stalking him! She traveled to spy on him in an attempt to catch him in adultery, and even began to slander her own husband, perhaps in an attempt to cause his popularity to lessen. She moved out several times only to have John chase her back down. After twenty years of this kind of marriage, John finally gave up. She moved out and he did not chase after her, and that was that.

Like I said, bizarre lives. There are other details that make their lives remarkable in other ways, but just with what has already been said, what are the lessons to be learned?

First, notice how Whitfield and the Wesleys, though they had times of intense disagreement, learned how to keep doctrine in its proper place. They understood that they could have so much unity in the Gospel and that their differences on the Arminianism/Calvinism issues were not large enough to cut ties with one another or to cease doing ministry alongside one another. I know it is my own personal tendency to want to argue with anyone who doesn't hold to my views on things, but there are times and places and ways to have those conversations and we must all learn where each particular doctrine belongs. Whitfield and the Wesleys were able to be so reconciled (despite their ongoing theological differences!) that when asked whether they would not see John Wesley in heaven, Whitfield replied


Yes, you’re right, we won’t see him in heaven. He will be so close to the Throne of God and we will be so far away, that we won’t be able to see him!

Wow! Can you say that about your godly brothers or sisters with whom you have strong disagreements?

Second, notice how strange and messy their lives were. Drawing lots! Tense arguments that strained their friendships to the breaking point! Twenty years of a miserable marriage, a marriage that could have been avoided if counsel was sought, a marriage that could have been improved if John and Molly were willing to work through things biblically and make some lifestyle changes. Messy lives! And yet God used John, Charles, and George despite their failings, shortcomings, and poor decision making. That is encouraging to me because I know my own life is messy at times as well. To know that God can use me despite that gives me such hope!

Now, I shouldn't have to say this but I fear I must: this does not mean that it doesn't matter how we live our lives since God can use us anyway! We should be seeking to live lives of holiness and godliness in dependence upon the Holy Spirit! But it is a comfort to know that though we all stumble in many ways, God can still use us despite that.

Finally, you really should be subscribed to the Do Theology and Revived Thoughts podcasts! If you're not, what wrong with you, anyway?

Be blessed; be a blessing
Church History Podcast Unity