The Reliability of the Biblical Text

February 09, 2020
Some time ago I wrote a series of articles on the practical applications of our church's doctrinal statement. This article was a companion article to that series, specifically to the article on the Holy Scriptures.

Some might read the previous post on the doctrine of the Scriptures and say “well, that’s how we should respond if the Bible is true, but how do we even know it is true? How can we be sure that the Bible we read today even says the same thing it said 2,000 years ago?” I deliberately avoided dealing with such issues in that post because the series is focused on the practical outworking of our theology, not on apologetical and/or polemical arguments. Therefore, that post simply assumed the veracity and trustworthiness of the Scriptures.

However, in light of the fact that many people today attempt to malign the Bible by saying things like “we only have copies of copies of copies and, like a game of telephone, the message has gotten very distorted” I thought that I would share a brief post on the reliability of the text of Scripture.

We CAN know that Scripture is reliable and trustworthy.

When it comes to ancient literature, there are two essential factors that help us understand whether or not a text as we have it today accurately reflects the original writings. Those two factors are, 1.) how many manuscripts (which is the technical name for a copy) do we have?[1] And 2.) how close to the original writings are those manuscripts?

In the case of the New Testament, we can have a supreme amount of confidence that the text that we have today accurately reflects the original writings. How can we be sure? Two reasons:
Just for the sake of comparison, let’s take a look at another ancient work and compare it with the Bible in terms of the age and number of manuscripts available. [2] Take Julius Caesar, for example, and his book The Gallic Wars. This book was written to tell of his military exploits and he wrote it approximately in the year 50 B.C. That book was copied and copied and copied--and it should be noted that there were no printing presses back then, so this is all hand-written copies. We only have ten manuscripts of that book today (which is actually a decent amount of manuscripts for works of antiquity). The very oldest manuscript of that book that we have today dates approximately to the year A.D. 900. That’s nearly a full millennia removed from the original writing. Despite that fact, no credible historical scholar doubts that what we have in those ten manuscripts accurately represents the original work. If we were to examine other works of antiquity from this era, we would find similar data.

Now, when we compare this to the New Testament, we see something very significant. The New Testament was written over a period of several years, ranging from A.D. 40-100. We have manuscripts and fragments of manuscripts that date all the way back to the second century, so we are talking about a time gap of only a few decades, rather than 1,000 years like Ceaser’s work.

Furthermore, there are over 5,700 ancient manuscripts available to us today for us to compare and contrast to see if the copies are different or are similar. Guess what? There are very few differences, and the difference that do exist are things like changes in spelling, minor scribal errors, and things of that nature. It is possible to discover and correct these errors because there are so many copies available to us today that have been widespread throughout the world. It is also important to note that none of these variants that we have found change the meaning of the original text. 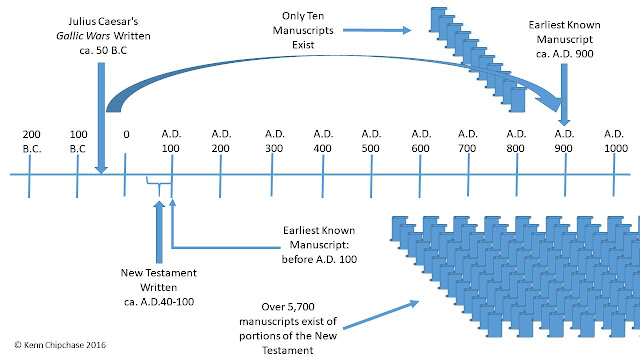 Because of the number of manuscripts that we have, and because they are so close to the original time of writing, we are able to cross-examine portions of Scripture and this process leaves us very confident that the Bible has in fact been copied reliably. No serious, honest, and informed historical scholar can deny what we have in the New Testament. The text of the New Testament, as it stands today, accurately reflects the original.

So that’s the New Testament, but what about the Old?

We have very good reason to trust that the Old Testament has not been corrupted either. For many years, the oldest complete Hebrew Bible was from the year ca. A.D. 900 (called the Masoretic Text, or MT). That was one full copy, and it was hundreds (if not thousands) of years removed from the original writings. Some pointed to that as a major point of criticism and ‘proof’ that we could not trust that the Old Testament, as we have it today, accurately reflects the original writings.

Not so fast! A discovery was made in the years of 1946-1956 that greatly helps our understanding in this area. Archeologists discovered what are known as the Dead Sea Scrolls. These Scrolls were dated back to the year 125 B.C. and in those scrolls was a complete copy of the book if Isaiah. When this older copy of Isaiah was compared to the copy that we had from A.D. 900 (which is over a thousand years and many generations of copies removed), we found that the two copies matched almost 100% and the differences that existed did not affect the meaning of the text in any way. This helps us understand and realize that the people who were employed in copying the Bible were accurately doing their job.

Furthermore, I wrote about an ever more recent discovery here that explains how scrolls dating back to the year 300 match letter for letter with the MT. Read that article for more information about that.


What are we to say about these things?

The Bible we have today is God’s Word. He has preserved it and we can be confident in knowing that the Bible is reliable and still says today what it said way back when it was first written.

Be blessed; be a blessing
Kenn Chipchase


[1] I could add to this “and how spread out are they geographically?” When there are many copies, it helps when they are from widespread geographical areas because when they are compared and still agree, it gives additional weight to the reliability of the text in question.
[2] None of this information is original with me. There are dozens of resources available from a wide range of books, journal articles, and internet sources that all affirm these same facts. I cannot cite specifically where a lot of this information came from simply because I do not remember specifically. I’ve interacted with the material so much from so many sources that it all just runs together. The information is easily accessible by anyone with a simple google search. Josh McDowell's book Evidence that Demand a Verdict is one print resource.